Catch Up on Lunch Line Up 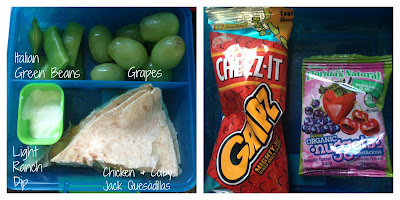 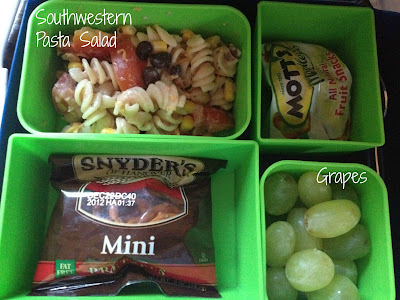 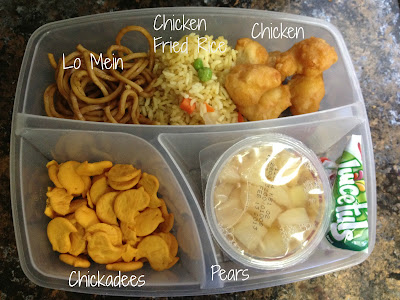 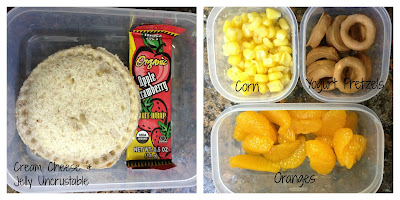 Spank loved his Labor day inspired Bento he took this week. He just said he was mad he didn't get any ketchup and mustard, I didn't bother including a bun, because to be honest I know my child and it would be a waste! He gets his fill on his grains at breakfast and dinner, trust me! 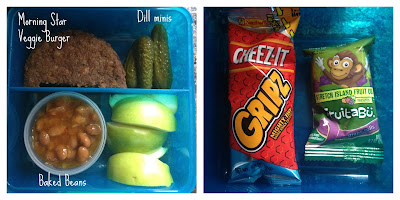 If you've been reading you've noticed that Spank has started school this year! It was a bittersweet moment for me, like any other mother. Now we are a little over a month into the year and things are going smoothly. He has been taking his lunch and snack daily, due to his dietary restrictions. I knew I wanted to use reusable lunch products, instead of buying all these brown paper bags and juice boxes daily with ziploc bags holding it all. With all the "lunch gear" I was buying, I'll admit I was a bit worried about him losing his stuff or it becoming mixed up with another child's. When I was offered the opportunity to review Oliver's Labels, I knew this would be perfect with Spank starting school.

Oliver's Labels makes high quality waterproof labels and tags that are dishwasher & laundry safe that  stick on all your kids' stuff, they will never fade, scuff or peel. One of the many great things about their labels is they have a ton of different prints and packages available for both boys and girls.

The Mini labels are Mini Labels are great for items that don't have the room for the original labels. These are good on items that will be used in dishwasher, fridge, microwave or outdoors. We used a few of ours on Spank's thermo containers for his lunch, I liked the Mini labels on them because I was able to place them on the edge of the lids and didn't have to cover the design on the bottle.
The Original Labels are great on anything from Sippy cups to toys. We placed a couple of ours on our bento boxes to help guarantee that our containers didn't get mixed up at school. Both the Mini & the Original labels are waterproof, which makes them great on items that will be placed in the dishwasher, microwave or fridge. Our items have gone through the dishwasher many times and no scuffing, peeling or wearing, we love them!

The Shoe labels are designed to stick inside the heel of each shoe. They come in a left foot shape and a right foot shape, which makes it easy to stick inside each of the corresponding shoes. Spank is extremely rough on shoes, in fact within him wearing his shoes 4 times, he has torn the inside back out of one of his brand new pair of Van shoes, the labels however are still firmly stuck to the bottom insides of the shoes. If that isn't durability I'm not sure what would be.

The Stick-eez clothing labels are great for shirts and shorts, I also placed some inside his lunch box and book bags. They do have bag tags, and mini bag tags, but I figured he would be more likely to remove it if he could see it. These labels are no iron, no sew tags that can be removed when you are ready to pass on the items.

We are extremely pleased with our Oliver's Labels and compared to some of the other label companies I've used I found these to stick just as well, but I really enjoyed the prints a lot better. They have quite a few choices for boys, which you all know I love!

Spank choose the Crossbones print and I was happy with the way they looked when they arrived, as was Spanky. They have everything from superheros to dinosaurs for boys or cupcakes to girly crossbones for the girls, with a few gender neutral and adult prints in there. They also have a great free addition you can add to all your labels called Found It. This addition allows you to add an address to your labels online, this is NOT printed on the label, but it does print a unique barcode onto your labels and lets anyone know who finds the item that they can find the owner on their website, Oliver's Labels will then send you an email letting you know, so none of your information is ever shared.

Buy It:
If you would like to purchase any of the items above or personalize your own package, you can do this and much more on at Oliver's Labels. I received one or more of the products mentioned above for free using Tomoson.com. Regardless, I only recommend products or services I use personally and believe will be good for my readers.
Posted by Oh the joys of boys at 9:17 PM 4 comments:

Time really does fly once you get about half way through your first trimester. I am officially 21 weeks old and cannot wait for our new little man to arrive! I will admit I am a bit concerned with how Chunk will react, him being the baby and all, he is very attached. I do know that he will be perfectly fine once he gets used to the idea when Baby 3 makes his debut. Spank, on the other hand, cannot wait for his smallest baby brother to arrive! With every doctors appointment I return from Spank is asking me if the Doctors have gotten the baby out, and where is it? Why didn't I bring him home with me? He is extremely anxious to see this little guy, Which is a huge relief for me. For the entire first trimester all he did was tell people he was excited to be getting a baby sister, we prepped him for the possibility of it being another brother, but he just kept telling us he already had a brother and needed a sister now. So, we are both excited to see he has warmed up to the idea of having two brothers. Now, all we have to work on is him sharing his trains with these two younger guys!

With time approaching so quickly and us having two birthdays, plus Christmas arriving at the same time as this little man, I have realized we need to get a jump on picking up items we will need for him. We hadn't planned on having any more and had just given away a majority of the items we had from Chunk, so we will be repurchasing quite a few baby items. The good thing about it is by the time the third baby comes along, you know what you really "need" and the items you never used and probably never will. Either way buying baby stuff again is exciting!
Posted by Oh the joys of boys at 4:53 PM No comments:

Well today starts a short school week, which means one less lunch to plan for Spank. I figured I'd let him help out a little more with this one, hence the yogurt & yogurt covered strawberries. Either way, its going to be devoured today, that I am certain of! 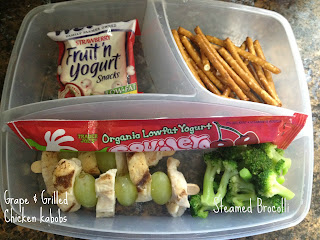 Does your child ever get sick of their plain old sandwiches? Spank won't even touch a normal pb&j sandwich, never has been that child, I don't fight it anymore. He does like peanut butter/soy butter though with apples cut up, so when I saw this I thought why not give it a try! You could try other things sandwiched between the apples as well. 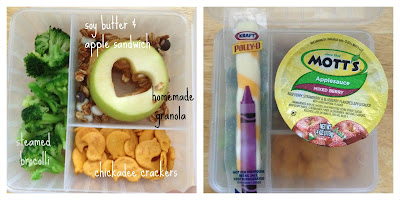 Notice the heart cut out? Yea, I'm going to have to "boyify" my cut out selection. He told me "Mom, hearts are for girls, NOT boys!" I did try to convince him a flower was more girly, but I'm not sure I convinced him!
Want to share your bento lunches? Link Up... 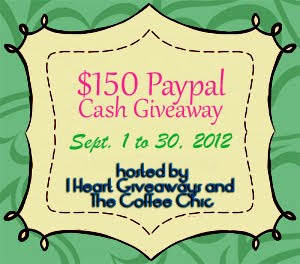 Participate in I Heart Giveaways and The Coffee Chic's upcoming $150 Paypal Cash Giveaway.


One winner will get a chance to win $150 Cash sponsored by Giveaway Scoop!

All you need to do is to make an announcement about the FREE sign-up on your blog. This is a good way to gain more followers on your Facebook page. Co-hosting spots are also available! Click here or on the banner above to sign-up.
Posted by Oh the joys of boys at 4:41 PM No comments:

Spank helped out a lot with this one! I had picked up a HUGE watermelon this past weekend at the farmer's market and needed to use it up. When I say huge I mean it filled 2 large tupperware containers AND I had to pull out my large rubbermaid pitcher and store some in there! No one minded though, it tasted delicious and it was incredibly cheap! Chunk came home and wanted some as his after school snack too! 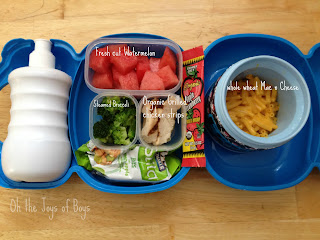 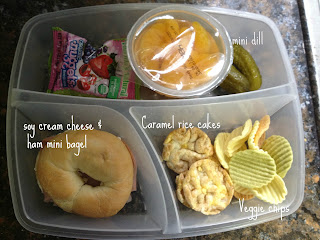 We decided simple was best this day! Either way he ate & it fit his diet! I think he was most upset that I didn't include a tomato of some kind this day, so I decided to surprise him for snack! 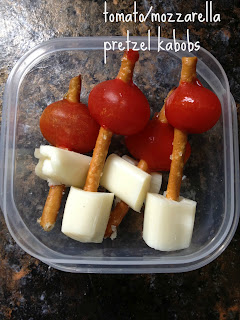 He loved it!
Have some great bento meals of your own to show off? Link Up!

What Child doesn't love Pizza? I still haven't encountered one that didn't! They have their little minds made up from a young age that pizza is delicious! Spank is no different, perhaps worse with his love of pizza(it comes naturally from his father). If I let my children make my meal plan weekly it would include pizza 5 out of 7 days or more, I'm sure! I started making whole wheat tortilla pizzas as a healthier option to all those carbs and grease in a lot of other pizza. This is one night we have NO leftovers in our house! 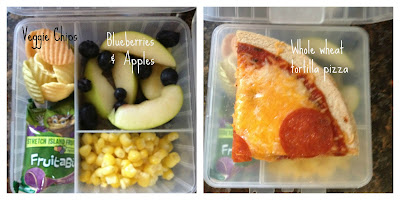 Can you tell this one was extremely influenced by Spanky, he is the biggest veggie dog child I've ever met!
I asked him Tomatoes or Broccoli and he said both, so I decided I'd let him have a little of each. He said this was another of his favorites!! 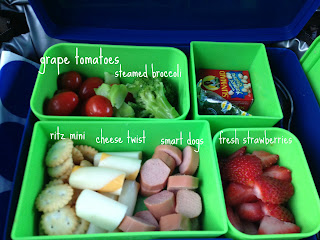 Have some great Bento meals to show off? Link Up below!!

So Last night was Taco Night in our house, and Spank asked to take it in his lunch today. Of course, this was fine by me! I knew his lunch would be devoured, cause he LOVES Taco night! I think we all do. 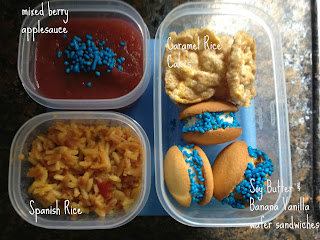 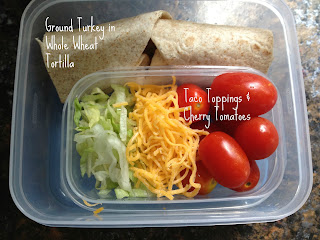 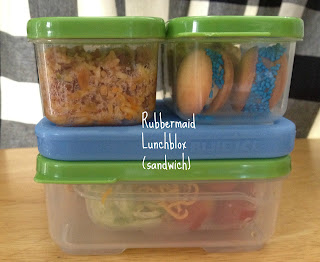 Have some Bento Lunches to show off? Link Up below!

A Public Service by Dentist Advisor

Add me on Google+